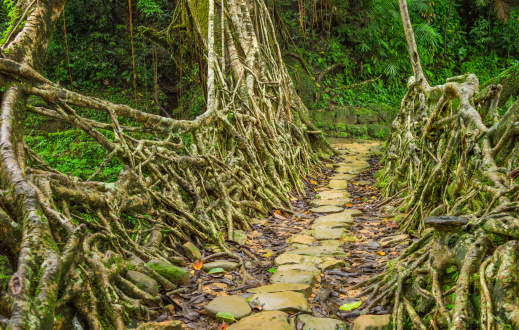 In its simplest context, a bridge is a solution for getting from point A to point B. The best bridge is one that accomplishes that task with the least amount of difficulty. But bridges, even the metaphorical symbolic ones, come in all shapes and sizes.

In northern India, the roots of the banyan fig tree are used by the indigenous population to form bridges across ravines and streams. As solutions to problems, these living root bridges are quite successful. It is not known who first built these amazing structures, but the trees are known to live for more than 500 years. With that knowledge, at least as far as bridges are concerned, you don’t have to worry too much about the decay of your infrastructure.

These aerial roots grow perfectly well in the air, and the young pliable roots are trained to travel through hollowed out tree trunks laid across whatever must be crossed. The process can take up to 15 years, but once the roots attach themselves to the other side, the bridge is usable and simply must mature with a hardening of the roots to become fully functional. Some of the best solutions take time, but if you have one that is going to perform for 500 years, you have a pretty good solution.

Exemplifying another kind of bridge, in 2014, the Johns Hopkins Bayview Medical Center in Baltimore, Maryland, received an award of distinction for its leadership in the areas of diversity and inclusiveness. In fact, the award presented by the Greater Baltimore Committee is actually called the Bridging the Gap Award.

Led by Dr. Richard Bennett, Bayview’s Diversity Council was recognized as one of the nation’s top ten such councils. In this case, bridging the gap involved uniting business interests with community interests with the bridge of commitment toward generating summer employment for minority students pursuing health care and life sciences careers. Bayview was also recognized for its efforts to support leadership initiatives among the medical center’s under-represented minority and female staff members.

One of the most innovative and successful business leaders to emerge in the past 50 years was Steve Jobs. One of the primary problems he routinely addressed was how to do business with a focus not on his product, but on the utility of that product, and how clients received and used that product. Steve Jobs was focused on people, not products. As a result, his energy was poured into solving the problems of people rather than solving the problems of making products.

Clearly one of his biggest success stories was the iPhone, as it performed the functions of three or four machines with one device. That solves a people problem creating a bridge between multiple needs and utility. But it didn’t stop there for Jobs. He went further by creating an environment in which the iPhone was not merely an industry leader. Other companies in that industry were creating applications to use on his iPhone. In essence, he created an ecosystem in which his product sales were now being driven by other companies through their software marketed specifically for the iPhone. Steve Jobs built a bridge between multiple needs of people and the obvious solution to those many needs with a single product. And then, he widened the bridge by getting other companies to basically market his product for him.

Business has always been about solving problems. The best bridges solve problems the most effectively. Like the famous folk-rock group Simon and Garfunkel said in their Grammy-winning song, “like a bridge over troubled water, I will lay me down.” Successful bridges make the journey over troubled water a much easier task.